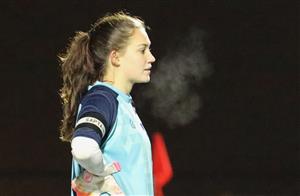 Marion High School senior Alyse Buirch has signed a National Letter of Intent to continue her academic and soccer careers at Tiffin University.
Surrounded by family, coaches and friends in the MJSHS Library, Alyse made her decision official on Monday, Nov. 22.
“They had my major (Forensic Psychology) and the atmosphere that the soccer team creates is just fantastic,” Alyse said. “I am so excited.”
Alyse was a two-year starter for Marion. The Black Knights went 15-4 and reached the Section V Class D1 championship game this fall. Alyse finished the season with a 0.698 goals-against average and .876 save percentage while allowing 13 goals on the season. She was a first-team Wayne County selection and named to the Section V Class D1 All-Tournament Team.
Alyse was joined at the ceremony by her father, Dana, mother, Kelly, and brother, Nic.
“I am so happy for Alyse and her family,” Marion Athletic Director and Girls Soccer Coach Lori DeLyser said. “She has worked hard for this opportunity and we wish her continued success in the classroom and on the soccer field.”
Alyse is very active in school activities as a member of National Honor Society, All-County Choir, Select Choir and Show Choir. She was recently cast to play Rosy in the school musical, Mamma Mia, in March.
In addition to playing varsity soccer for Marion, Alyse competed for the Lakefront Soccer Club and trains with the Keeper Institute. Brent Collings is her keeper coach.
Tiffin University, located in Tiffin, Ohio, competes at the NCAA Division II level and is a member of the Great Midwest Athletic Conference.