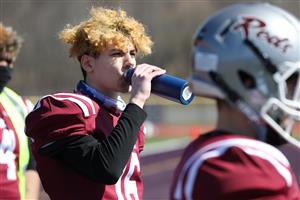 When Logan Karpp fielded the opening kickoff on a sunny Saturday afternoon at Lyons High School, he didn’t just make the first play of the regular season for the Newark varsity football team.

“That was pretty crazy,” Karpp said. “I am always really nervous on the first play. I saw the ball in the air coming toward me and I was like, 'Don’t drop it.’ I just wanted to catch it and run and not get tackled. I got tackled, but it was still pretty cool.”

After years of hoping to play high school football, Karpp is one of 11 Marion students suiting up for Newark at the modified, junior varsity and varsity levels this spring.

The plan started to take shape in the fall of 2019 when Marion Athletic Director Lori DeLyser had a conversation with Newark Athletic Director Chris Corey. The discussion led to a meeting with potential players in February 2020 and - after the fall football season was paused due to the COVID-19 pandemic - the opportunity to participate this spring.

“I just want our kids to have the same opportunities that other kids in Wayne County have,” DeLyser said as she stood on the sideline for the March 20 opener against Honeoye Falls-Lima. “I’ve been asking and asking, and finally we had a taker. I am just thrilled that Newark agreed to help out and give the Marion kids this opportunity.”

The arrangement benefits Newark, too. The Reds, who compete in Class B, have had smaller rosters for football in recent seasons and the addition of the players from Marion helps with depth across the board for games and practices.

“I just feel like it has been on our radar for a little while,” Corey said as he took in the varsity opener. “We involved our coaches in the conversation early and they certainly understand the benefits of having the Marion students participate.” 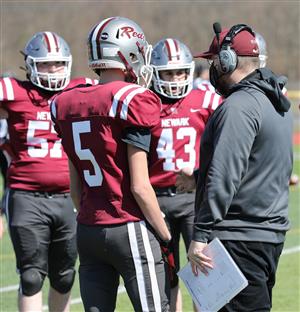 Corey mentioned the success that East Rochester and Gananda have had in fielding a combined football team as a model for the collaborative effort between Newark and Marion.

Merged teams are becoming more common across Section V. Marion has students that compete with Sodus in Alpine skiing and boys swimming and Newark and Midlakes combine for girls lacrosse.

Newark varsity football coach Mike McGavisk described the transition to adding the Marion students as “smooth,” and quickly noted that the players from Marion helped Newark to field the only junior varsity team in Wayne County.

“It is a really nice partnership,” McGavisk said. “We are very excited to have the Marion student-athletes with us at all levels. They have come over and they have bolstered our program - and, they are great kids.”

The student-athletes are also benefiting off of the field.

Marion junior Jacob St. Cyr played one year of youth football in Webster and fell in love with the game, but when he got to high school he didn’t have a chance to play. St. Cyr was encouraged by the chance to play this season, but after the pandemic hit, he “just stayed home playing video games.”

The return of football has inspired St. Cyr, who says he has lost 30 pounds and improved his grades since learning about the spring season.

“This turned my life around,” St. Cyr said. “I have motivation. I have gotten in shape, basically cut soda out of my diet and am doing better in school, and it’s all because of football.”

The experience is helping the players broaden their horizons socially, as well.

“Everybody kind of knows everybody around here (at Marion),” Karpp said. “So it’s nice to meet some new people and make some new friends.”

And just how did it feel to get out on the field and play after an almost three-year wait?

“Really good,” St. Cyr said. “It was finally the moment that I had been waiting for.”