Shane Dehn has worked in Marion for less than three years, but the District already feels like home.

“In some ways, it feels like the community has adopted me,” said Dehn, who was appointed Marion’s interim Junior-Senior High School principal at Monday night’s Board of Education meeting. “I feel a strong sense of commitment and an opportunity to continue to give back.

“I am beyond excited. Excited doesn’t nearly capture it. I am humbled, thrilled and overwhelmed by the support that I have received.”

Dehn has served as assistant principal for grades K-12 since coming to Marion in January 2018 and will begin his new duties on Monday, Oct. 5.

“The District is fortunate to have the leadership qualities of Mr. Shane Dehn ready to step in as the interim principal of the Junior-Senior High School,” Marion Superintendent Don Bavis said.  “As the K-12 assistant principal for us, he has demonstrated outstanding problem-solving skills, as well as the ability to form relationships with people of all ages and backgrounds.

“Mr. Dehn truly embodies the district core value that students are at the heart of what we do.  It wasn’t a hard decision to make.”

Dehn grew up in a family of educators as his father worked as a physical education teacher and high school principal and his mother was an elementary teacher in Webster. He graduated from Wayne Central School where he was a three-sport athlete (football, basketball and baseball) in high school.

“I am a western Wayne County boy,” Dehn said. “I understand the culture here.”

That understanding has helped Dehn connect with the community since his arrival in Marion. He has been a strong presence in both the elementary and junior-senior high schools and has formed bonds with students, families, staff and the community at large during his time in Marion. 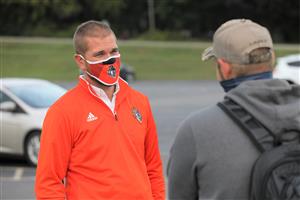 “Since coming here, I have just fallen in love with the District,” Dehn said. “You have that small-town feel and all that comes with that, but we have mega capacity with academics, the arts and athletics. As the incoming interim Junior-Senior High School principal, I see so many opportunities for our students to pursue their passions.”

Dehn received his bachelor’s degree from SUNY Geneseo and earned his advanced certificate in leadership from SUNY Oswego. He began his career as a sixth-grade teacher in Midlakes, where he also coached three sports.

“I really started connecting with the idea of being a leader there,” he said of Midlakes.

Dehn followed up on that feeling by attending a leadership academy led by David Bills and that only strengthened his feelings.

“It was awesome,” he said. “I was just highly inspired to be a leader.”

Dehn views his new position as a “unique and powerful” opportunity to continue to connect. He succeeds Nicholas Ganster, who is leaving the District after being appointed high school principal in Newark last week.

“I am committed to the Junior-Senior High School students and staff and am focused on their success in grades seven through 12,” Dehn said. “I think success for us includes providing a rich educational experience with opportunities in academics, the arts and athletics.

Dehn enjoys hunting, fishing and boating and remains a western Wayne County boy. He and his wife, Shana (who is a kindergarten teacher at Midlakes), live in Walworth with their son, Landon, daughter, Jordyn, 3, and dog, Jeter.